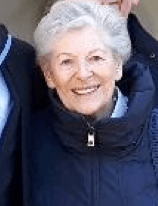 I have been a resident of Llanwrtyd Wells for over 50 years, having started school in Llanwrtyd and continuing on to Builth Grammar School. On leaving school, I attended Chelsea Polytechnic on a pre B pharm course and went on to do a 2 year apprenticeship with a pharmacist. In 1957 Elfed and I were married at St James Church, Llanwrtyd, moved to our first home in Weston-Supper-Mare and began several career moves throughout UK and Germany before finally returning to Llanwrtyd in 1988. For 10 years I was employed by Powys County Council, having gained a London Chamber of Commerce Private Secretary’s Certificate along the way.

I have had the honour of serving as Mayor on two occasions and now represent the Town Council on the Victoria Hall Centenary Committee; HOWLTA; and One Voice Wales as well as being involved in other aspects of life here – a founder member of ‘Friends of Llanwrtyd Station’, started in 1997 and still going strong; membership of the Festival Committee; the Thursday Club; Chairman of the Gibbins Trust Committee, Royal British Legion Honorary Poppy Appeal Organiser; Editor of Grapevine; organiser of monthly community church lunches and Peoples Warden at St James Church.